Why Are They Called CONEX? 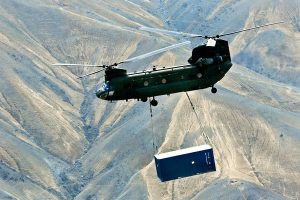 In the early half of the twentieth century, intermodal containers were made to carry a bundle of goods on ships and trains. They were rectangular boxes with a steel frame and helped with the shipments, but could not be stacked on each other. During the Second World War, the American military experimented with ways to send massive amounts of supplies to both the European and Pacific fronts. The wars would end before the shipping container that could be stacked was designed.

The CONEX Box was developed in the late 1940s by the Transportation Corps of the U.S. Army and called, “The Transporter.”   They were used extensively during the Korean War for shipping supplies to the troops.  The container was built to carry 9,000 pounds of goods at once. After the war, such containers began being used commercially in the mass transportation of goods on and off ships. It was called the Container Express, which was shortened to CONEX (CON = Container, EX= Express).

CONEX boxes are still used widely today.  These containers, made out of 14-gauge steel, are very durable and extremely secure when moving them around. Carolina Containers has customized boxes with unique features such as:

Carolina Containers carries CONEX containers in different sizes: 10 feet, 20 feet, or even 40 feet! They can be a mobile office, they can be refrigerated, and they can even be a temporary living space – with sink, toilet, and shower, and big enough for a bunk bed! The number of choices and possibilities that you have to choose from are nearly endless – and with all of the customization, we can do you have no reason to have to shop elsewhere or look for another solution!

Exterior-wise, need a paint job for a container? Or fix any damages? Carolina Containers does that too.

Carolina Containers also handles shipping container transport to construction job sites to be used as an office. They deliver containers to buildings and residential homes where it acts as a place of storage. They do all of this in and around Raleigh and across the state of North Carolina. Why? Because Carolina Containers has the largest selection of CONEXes on the East Coast.

The CONEX container is not just for storage anymore. It’s for living. Call Carolina Containers now at 919-747-4800 or contact us here.